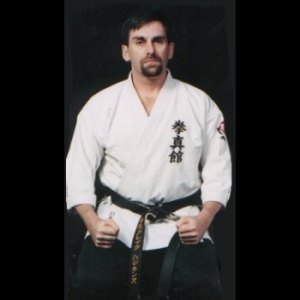 Since that time he joined the Marine Corps and eventually went to Okinawa and began training in Shorin Ryu Kenbu Kan under Shihan Uezu Yazu, obtaining his ShoDan in 1982. He then left Okinawa in 1983 and went to 2nd Recon Bn where he was trained as a SERE (Survival, Escape, Resistance to Interrogation & Evasion) Instructor and also trained as a Sentry Stalking and Silent Kill Instructor.

In 1985 he left for Okinawa and was attatched to 3d Recon Bn. He began studying Okinawan Kempo and Kobudo under Shihan Mahara until 1988 earning his brown belt.

He started to train under and assist Tom Obrien teaching at the Tengan Dojo in 1988 in Okinawa aboard Camp Courtney Marine Base and left Okinawa in 1989. In 1990 he came back to Okinawa and taught at Camp Foster Dojo. He then left for the Gulf War in Jan 1991 attached to B Btry 1/10 2nd Marine Division was a part of Operation Grizzley and Task Force Ripper and was awarded the Combat Action Ribbon during these operations. In Sept of 1991 he returned to Okinawa and again taught at Camp Foster Dojo and then in 1992 moved up to take over Tengan Dojo. and eventually took over the youth class on Camp Courtney until January of 1997. Since 1988 Hodgkins has been training with or under Sensei Tom Obrien, Sensei Ichuro Kishimoto, Sensei Troy Croker, Sensei Gary Oliver of Austrailia, Sensei Fransisco Aguilar, Shihan Greg Lazarus, Shihan Perci Johnson, Shihan Isao Kise, Shihan Taruya and of course Hanshi Fusei Kise. Sensei Hodgkins main teachers have been Shihan Perci Johnson, Shihan Isao Kise, and Hanshi Fusei Kise.

Sensei Hodgkins along with Sempai Joe Bridgman and Sempai Allen Mayfield taught Rape Awareness Avoidance and Self Defence Seminars on Okinawa on a monthly basis, and he will continue to teach those seminars when in TN. He has also taught Child Abduction Prevention and Awareness Classes at Kadena Elementary School, Kadena Airbase, Okinawa Japan.

Sensei Hodgkins was promoted to Rokudan (6th Degree Black Belt) and also awarded his Shihan Certification on 3 May 1997 during Grandmaster Kise birthday party and Hodgkins Sensei going away party at the Headquarters Dojo, Okinawa Japan.

Sensei Hodgkins left Okinawa in May 18, 1997 and and retired from the Marine Corps. He opened the Fairview Kenshin Kan Karate and Kobudo Dojo Sept 1, 1997 Southwest of Nashville, TN.

In May of 1999 Sensei Hodgkins moved to Pittsburgh, PA where he will opening a school. Presently Sensei Hodgkins is only teaching private lessons and maintains the Federation Website. You can contact him through the website form.