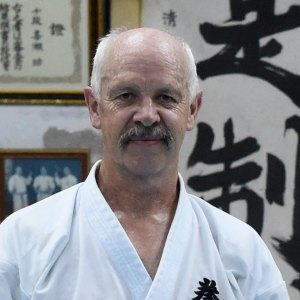 Gary began martial arts training in 1964 at the Ballarat Judo Club in Victoria, Australia. He progressed rapidly and achieved 1st Kyu twice as junior ranks were not allowed to grade to Shodan at that time. He began teaching Judo at the age of 13 and won the Ballarat Junior Judo Championship in 1968.

In 1969 he began formal training in Karate and achieved Shodan in Sei Ku Kai (a Shotokan derivative) under Sensei Wayne Williamson. He attained Nidan in 1975 in Shorin Ryu Matsumura Seito under Soken O Sensei, reaching Nidan in 1975. He has remained loyal to our federation ever since the establishment of the Kenshin Kan and was graded to Rokudan in 2005.

Gary has visited Okinawa and Japan on many occasions and enjoyed the hospitality and teaching of both Hanshi Sei and Kaicho. He also trains in Iaido and Kendo and holds the rank of Godan in both disciplines. He was President of Australia’s largest State Kendo Association – the Victorian Kendo Renmei for 10 years and still competes nationally and internationally, coming third in his division at the Australian Kendo Championships in 2005 and second in the National Open kata division in 2008.

Currently he teaches Karate at Maryborough near where he lives. In 2019 he was appointed as Director- Australia Branch by Hanshi Sei and Kaicho.