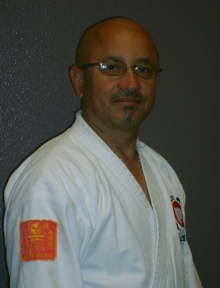 Profile
Started karate training in 1970 for 6 months of taekwondo while stationed in Hawaii.

Changed to Chinese Goju Karate from 1975 – 1976 while at MCAS Iwakuni Japan and obtained the of Green Belt. During this time I came to Okinawa and studied Shorin Ryu Orthodox Karate-Do under the Ku-Dan (9th Degree) Kise Sensei for 2 months.

Returned to the States for two years 1980 to 1982, Yuma Arizona and opened my own Dojo for Master Kise, Okinawan Kenshin Kan Karate-Do and Kobudo.

Returned to Okinawa Japan from 1982 to 1985. Taught for Master Kise at the Makiminato Dojo. Studied under both Master Kise and Isao Kise at that time. Promoted to the rank of Nidan.

Returned to the States Amarillo Texas from 1985 to 1988. Opened my own Dojo at Texas State Technical Institute (TSTI) and taught All Okinawan Shorin Ryu Kenshin Kan Karate and Kobudo. During these three years, I studied with two different taekwondo schools, Harvey’s USA taekwondo and Master Cho’s World Taekwondo Federation (WTF).

Returned to Okinawa From 1991 to 1993. Was promoted to San Dan my first year. Studied under Master Kise and Isao Sensei. Taught at Camp Foster and Kadena Air Base. Promoted to the Rank of Yon Dan upon my departure.